“The Adventures of Sacramento Jones” began in 2016 as a prospective book about a bovine ravaging towns, written by renowned Nebraska teenage author Connor Worden. But he decided soon after beginning the writing process that a novel was not the best way to tell the story of Sacramento Jones; instead, he formed a band. He named it Death Cow.

Now in his early 20s, Worden is as strange as they come. He’s the kind of guy who makes lots of hand gestures when he talks or will freestyle a rap verse at the dinner table just because he can. Sometimes his hair grows in ways only Einstein’s could have. He’s also a pretty damn impressive songwriter. Taking inspiration from ‘60s psych, ‘90s punk and 2000s garage, his weirdo-punk style is all his own. His raw, untrained wisdom provides firm foundations for members Reed Tiwald (guitar), Mari Crisler (bass) and Sam Crisler (drums) to cement the songs into organic expressions.

Nearly two years removed from writing the songs on their 2018 debut, Slow Drown, Death Cow is a much different band — one that has toured much of the country and packed basements around the Midwest. Most recently, the band kicked off 2020 with their new EP "Pioneer". Without too many spoilers, Worden’s songwriting on the new release (aided on a few tracks by the sibling rhythm section) is as heavy, anthemic and catchy as ever.

You might want to stay out of their path — Death Cow is a bull you won’t want to mess with. 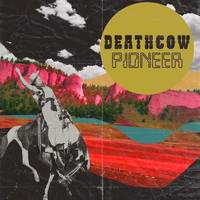